When Guilford County Animal Services found itself with a number of dogs who needed some extra marketing attention, they turned to live streaming on social media to put them in the spotlight and pique the community’s interest in virtual pet adoptions. Heidi Mitchell, Virtual Adoption Counselor at Guilford County, shared that they tried two different live showcases of their pets back in April.

The first occurred on a very rainy day (“it was monsoon pouring,” she shared!) and Heidi and a few dedicated volunteers were able to do in-depth shares on 18 or so dogs over the course of 2 hours, giving them each 5 minutes or so in the spotlight. They shot it all on an iPhone and immediately had 3 pets adopted as a direct result of people seeing them on the live stream!

The second showcase was done in collaboration with a local pet store’s weekly podcast and allowed the shelter to feature 15 dogs while also speaking about their programs, all over the course of about 2 hours. Thanks to the partnership with the podcast, they were able to have an even larger audience for that session, which was streamed from a laptop and used a program that automatically captioned the live stream (something Heidi plans to implement in all their future live videos!). As a result, 4 longtimers were adopted!

“Our adoption showcases have been received VERY well and we’ve had such a success that we are planning to have one a month going forward to showcase our long stay pets,” Heidi noted. In fact, in early June Guilford County Animal Services also did an adoption fair for senior pets, long-timers, heartworm positive dogs, and FIV/FELV cats that resulted in over 20 pets adopted!

The power of the live stream has shown up in other ways too, she said. “We have had a lot of success with live streaming over the last year in general. We often will go live to share our ‘Snacks to Relax’ sessions on Tuesdays, where we walk through the kennels giving the animals a treat. We have a lot of positive feedback, questions, and have had several adoptions stem from it as well.”

Here are some of Heidi’s top tips for success: 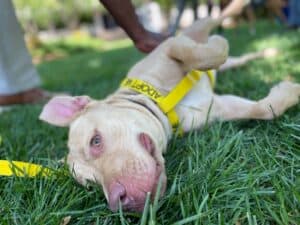 Want to learn more? See the magic in action by watching the first live showcase here: Click to Watch
Then check out the All Pets Considered Podcast Stream: Watch the Live Showcase

Caitlin is passionate about working with shelters and rescues to reimagine the way they tell their stories and connect with new audiences. She has served in the animal welfare field since 2008 and early on had the honor of working closely with diverse organizations across the U.S. to maximize resources, redesign policies, and find life-changing marketing solutions. In 2015, she got her MPA with a concentration in nonprofit management and in 2021, she began teaching marketing + communications for the University of Florida Master of Veterinary Science, Concentration in Shelter Medicine program. She lives in NY with a petite brindle pit bull named Sally who owns her heart.