Heart to HeART: Grassroots to Global with Michael Kloth and Lori Fusaro

HeARTs Speak began as a grassroots labor of love, with many talented, passionate and dedicated people working overtime to launch a global nonprofit with a unique vision to get shelter animals seen and saved. Since last year marked our 10 year Anniversary, we’ve decided to launch, Heart to HeART: Grassroots to Global for Shelter Animals, a celebration of the people who have helped to make HeARTs Speak possible.

At the core of who HeARTs Speak is, is the belief that we are stronger united. We all are willing to put our ego’s aside for the sake of our mutual love for, and desire to help shelter animals. No one person has all the answers, and we’ve been extremely fortunate to cross paths with people with something unique to contribute to our growth, always at just the right time.

With this in mind, it makes sense that a couple of HeARTs Speak’s Founding Members, Lori Fusaro and Michael Kloth are launching this blog series, so let’s jump right in!

What do you remember of the early days of volunteering for HS? 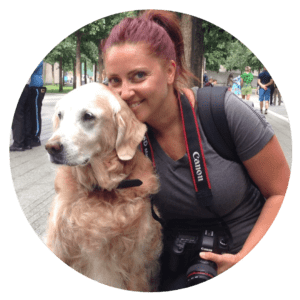 Lori: I had been a photographer for several years and my goal was to become a full-time pet photographer. Way back then that was really unheard of and there were very few pet photographers, but Lisa (Prince Fishler) was one of the few and I loved her work so much. I knew of her from social media and loved her website and her artwork was inspirational. I found HeARTs Speak and didn’t know that Lisa was the brains behind it. I filled out the application and when I finally realized that Lisa was the one in charge I was so excited and blown away that I was accepted into HeARTs Speak. I couldn’t believe that there were more photographers out there doing what I did in Los Angeles. It was so amazing to see that this small group of people (much smaller back then it’s grown tremendously over the years) joining together to do this work. 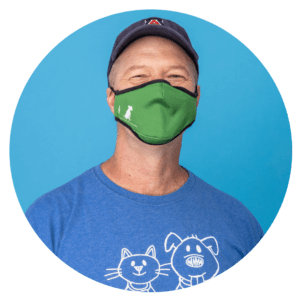 Michael: I remember Lisa reaching out to me shortly after I completed my MFA in photography.  My thesis project was working with adoptable animals helping market them to find their forever homes and my first book Shelter Cats was a result of that work. I imagine that was how she found me. The timing was important as I was looking for a way to build on my work from the previous few years that would help on a larger scale than just my local shelter. Early on there were relatively few professional pet photographers but I think the concept of HeARTs Speak struck a nerve. It was exciting to connect with other like-minded people around the country and the idea of helping others get started volunteering in shelters was enticing.

What inspired you to do this work? 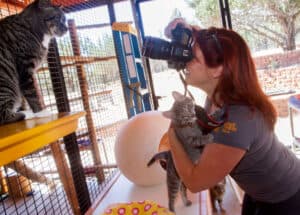 Lori: My inspiration was seeing terrible photos on Petfinder in the olden days. I felt like people would not be able to see past blurry photos or red-eyed flash photos. And so I decided to volunteer my time to help give the animals a better chance at finding their forever homes. The camaraderie of HeARTs Speak was amazing. It is amazing to this day. But back in the beginning I remember feeling that it was so fantastic being part of a group of like-minded people. I never thought in 1 million years that there would be so many willing to donate their talents.

Michael: I was introduced to the marketing person at our local shelter several years earlier and we just clicked.  My wife and I immediately started working with adoptable dogs and as I considered grad school, I started expanding my volunteer role at the humane society.  The need was obvious (as we all know) and I was hooked.

Did you run into any barriers? If so, how did you navigate these?

Lori: I didn’t run into many barriers. The biggest was probably so many animals to photograph and not enough hours in the day to get to them all. I remember in the beginning I would shoot for many hours and then leave without getting everybody’s picture done. The next week I’d come back and many of the dogs would be gone. I used to be excited because I thought they all had been adopted but sadly learned many had been put to sleep. Eventually, I stopped asking because my heart would break. But it did toughen my resolve to continue doing this work and to realize how important it was. 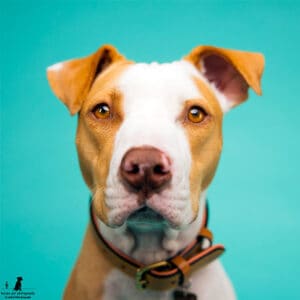 Michael: Getting into the work was super easy for me but I started at a really progressive humane society – after all, they had a full-time marketing person.  When I moved from Kentucky to Washington, I had a bit more difficulty.  I didn’t have time to be slow about starting because I was just getting into the independent study portion of my thesis work and had promised my committee that I’d be able to continue working with adoptable animals.  The humane society I reached out gave me a mixed reaction.  They didn’t really know what to make of me promising to photograph all of their animals each week while requiring that they sign a property release so that I was free to use the imagery as I intended.  The director was okay with it while his second was adamantly against it because it seemed wrong to her that I would ‘profit’ from my volunteer work as if I was taking resources away from the animals.  Eventually, I had to make my pitch to the board of directors and happily they approved my request.  I had a very productive several-year relationship with that humane society and made some long-standing friendships in my time there before I moved to Arizona.

What have you learned from the organizations you work with?

Lori: I’ve learned that there are many passionate people in the animal welfare world. It’s very exciting so many years later that there are so many more talented artist willing to donate their time to help these animals 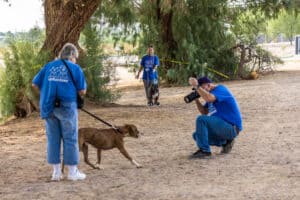 Michael: It has been interesting moving across the country and seeing how each organization operates.  When I moved to Tucson, the idea of professional shelter pet photography was still fairly uncommon but just as HeARTs Speak really started taking off, I think the entire animal rescue industry started to very rapidly evolve.  It has been so gratifying to see how my current organization (Pima Animal Care Center) went from a 60% live-release-rate facility when I started working with them to grow to become one of the most progressive shelters in the nation.  The county’s investment in the shelter and its leadership is nothing less than could be hoped for.  The biggest lesson really is that it is the people in the community that make all of the difference for the animals in a community.

How have you benefitted from doing this work? 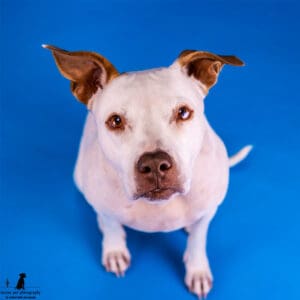 Lori: There is nothing better than meeting someone and having them say, “I saw your photo and it’s the reason why I adopted my dog (or cat)!” That’s happened many times and I can’t tell you how much joy it brings me because I know that I have played a role in an animal’s future and new lease on life. And I know how much animals mean to me, so bringing that love into someone else’s home is just an amazing feeling.

Michael: First and foremost, I adopted four amazing dogs over the years that I first met while photographing them for their adoption profiles.  I can’t really overstate how much I cherish those dogs.  The other big benefit all along has just been the satisfaction of helping to make a difference and all of the friendships I’ve made along the way.

Has your volunteer work contributed in any way to paid work? 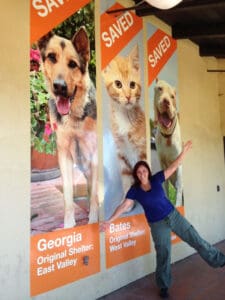 Lori: Yes. About eight years ago I became the staff photographer for Best Friends Animal Society and that was a direct result of me doing shelter photography. I randomly stumbled onto their website and saw that they had a place in Los Angeles and low and behold they were looking for a photographer. I immediately applied and got the job. It’s been the most fulfilling work I’ve ever done and I am so grateful to be part of such a wonderful community of people that help animals in so many ways.

Michael: My business absolutely started from working with adoptable animals.  While pets are still an important part of my business model, I’ve since expanded to include commercial photography and videography. In years past, I used to earn royalties from licensing stock photos of adoptable pets but that has really decreased with the changes in the photography stock market starting with the introduction of microstock. 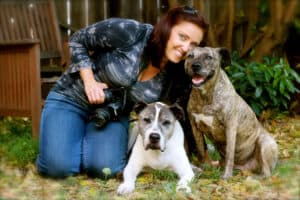 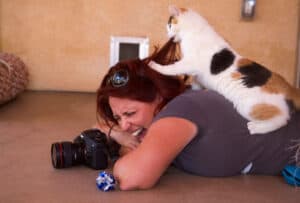 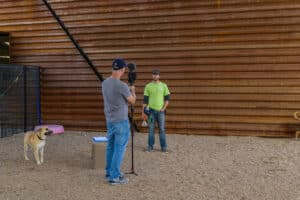 Lisa has always shared her life with a colorful collection of animal friends. An artist, professional photographer, and tireless advocate for all living things, she was inspired to found HeARTs Speak by her soul dog, Iggy. Lisa feels passion is the spark that can ignite change, and she strives to create a work culture that always considers and acts on this. A natural collaborator, Lisa believes in empowering stakeholders to come together and shape their shared vision of the future for animals.