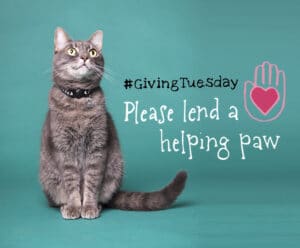 Every year since 2012, a day of dedicated support for the non-profit community has soothed the retail hysteria of Black Friday and Cyber Monday. Giving Tuesday is a global day of giving and the non-profit answer to the post-Thanksgiving consumerism that has gained momentum over recent years. It’s a feel-good exclamation mark for the season and can be an important piece of the developmental equation for animal welfare organizations.

A successful campaign can serve as the foundation for a strong financial year and pave the way for new growth! This year, over $168,000,000 was raised online in over 98 countries for causes near and dear to the hearts of over 1,560,000 — a new record for the initiative and a 20% rise over 2015.

So, what are the building blocks of a successful campaign? How do groups appeal to their supporters and maintain a loud enough voice among the competition of the day? To inspire your 2017 efforts (because it’s never too early to start learning from our fellow advocates!) here are 4 successful 2016 approaches from a few of our friends in the animal welfare world: 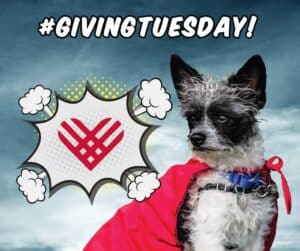 Nope, it’s Homeward Pet Adoption Center rolling out a witty, engaging, and altogether super cute superhero-themed campaign! This year, they used the power of visually delighting their supporters to surpass their Giving Tuesday goal, and incorporated some genius community engagement opportunities along the way that drew from popular and recognizable memes. They also created a virtual ‘event’ on their page via the Facebook event creation tool to generate a sense of urgency and celebration, and to help their supporters feel included and important in the mission.

Their approach is an excellent example of the difference a bit of creative direction and forethought can make. Next year, consider pre-planning a theme that you think will rally your supporters — whether through the key communicators of emotion or humor — and then build strong graphic assets around that theme. On social media, quality visuals are more likely to help your message get seen, absorbed, and shared, and when they’re paired with strong, clear language, donations are bound to follow!

The takeaway: Get inspired by what’s popular in social media as you’re planning your campaign, and fortify your messaging with strong, consistent graphic assets that delight your supporters and invite participation.

THE CENTER OF ATTENTION

Wisconsin Humane Society doubled their Giving Tuesday fundraising goal of $30,000 by focusing their campaign on one animal. Chance, a dog recovering in their care from a difficult period of abuse, served as their ‘poster child’, and his road to recovery inspired enough donations (and subsequent matching donations) that they well surpassed their goal. 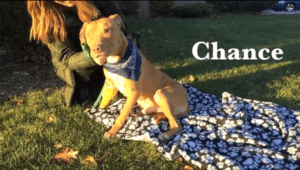 Their primary method for sharing Chance’s story was video, an increasingly popular medium in the social space. They created an honest and touching look at Chance’s journey and added it to their Giving Tuesday landing page on their website alongside a strategically-placed donate button. On Facebook, the video generated over 40,000 views and was accompanied by a set of paid Facebook ads and regularly scheduled TV segments that directed viewers to the donation page.

They even went one step further by enlightening local TV stations to Chance’s story and their Giving Tuesday mission via a press release. This well-timed PR engagement resulted in 4 local TV stations running same-day news stories about Chance!

The takeaway: Your organization is the first stop for many animals with interesting and touching stories that can really motivate your followers. So, tell those stories! Be honest, optimistic, and keep the focus on the pet.

HELLO, MY NAME IS…

This year, Lost Dog and Cat Rescue Foundation tried something new to engage their followers in a sentimental and memorable way — and it worked! 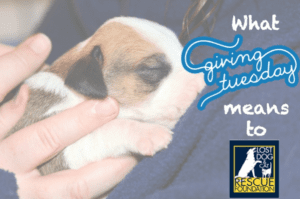 They began their Giving Tuesday by offering the opportunity to name a puppy to the first 10 donors who contributed over $200. That ‘sold out’ in just one hour! That afternoon, they set a goal of raising $5,000 in one hour and puppy pizza parties were the carrot on the stick. Those who donated over $750 got a visit from puppies and pizza (an irresistible combo, let’s be honest!). Not only did they meet that goal, but the parties generated a lot of excitement and positive exposure for the shelter that’s going to elevate their place in the community long after Giving Tuesday.

The takeaway: Make your followers feel special and important to your cause. Naming an animal is a very sentimental act and not one that will soon be forgotten. Let your community in and make them feel like part of your family through one-off or limited time privileges and experiences. 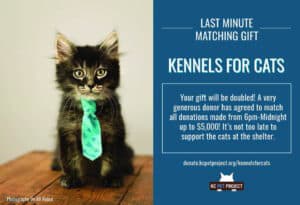 KC Pet Project, one of our beloved 2015 Perfect Exposure Project shelters, took the project-based approach this year, generating donations in support of one specific goal: a habitat upgrade for their feline residents. This strategy plugs into the human need for insight and completion. When a very tangible and clear goal is established, people know exactly where their money is going — and that is comforting. People may be more likely to give if they have the peace of mind that their contribution will be directly improving the lives of animals.

Strong visuals and a quality video helped them deliver their message.

The takeaway: Donors like to know where their money is going, and a specific project can be hugely motivational. There’s nothing better than knowing you’re directly contributing to an improved shelter stay for an animal.

We’d love to hear how your organization generated support during Giving Tuesday! Tell us in the comments below.