Guinea Pigs are notoriously adorable – their teensy lips, their fuzzy cheeks, their penchant to demand treats five seconds after they’ve already been given one – but they’re also notoriously difficult to photograph.

That is, unless, you know how to bribe them. 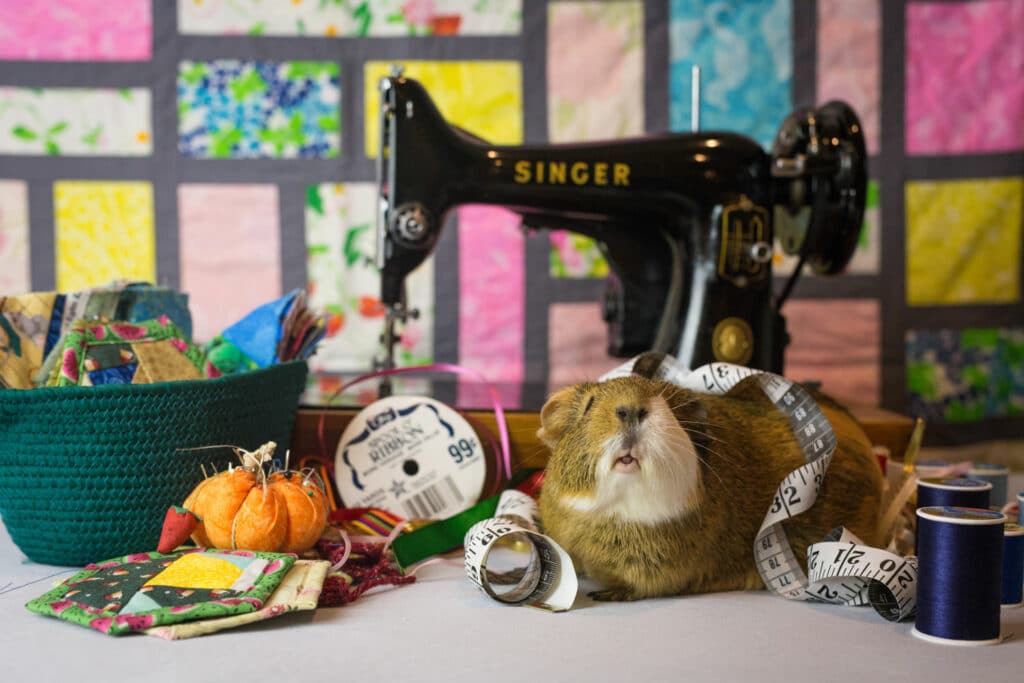 I started photographing guinea pigs 5 years ago after adopting my first pair, Cinnamon and Saffron. Cinnamon turned out to be pregnant, so three weeks later I wound up with a total of six. I was a new photographer at the time, and I thought to myself, “I’ve photographed dogs, how hard can photographing a guinea pig be?”

After months of trial and error, with more photos of their tiny behinds than of their faces, I finally figured out a few things. Now, I photograph these little ones more than any other adoptable animal and look forward to visiting the shelter and putting them in ridiculous settings, in the hopes that they will find their forever homes.

Here are a few of the things I’ve learned along the way.

If you want to keep guinea pigs happy and interested during the shoot, bring on the treats. Whenever I work with the littles, I usually have a mixed bag of veggies ready. Guinea pigs love to eat, so if they’re nibbling, they’re going to be less freaked out by what you’re doing.

Shelter guineas often come from a range of backgrounds and experiences, and can, therefore, be a little unpredictable — and it’s often difficult to gauge how they’re doing if you’re focusing on shooting. Having someone there to give them treats, pet them between their fuzzy ears, and help calm them down so you can focus on getting the perfect shot is so valuable. 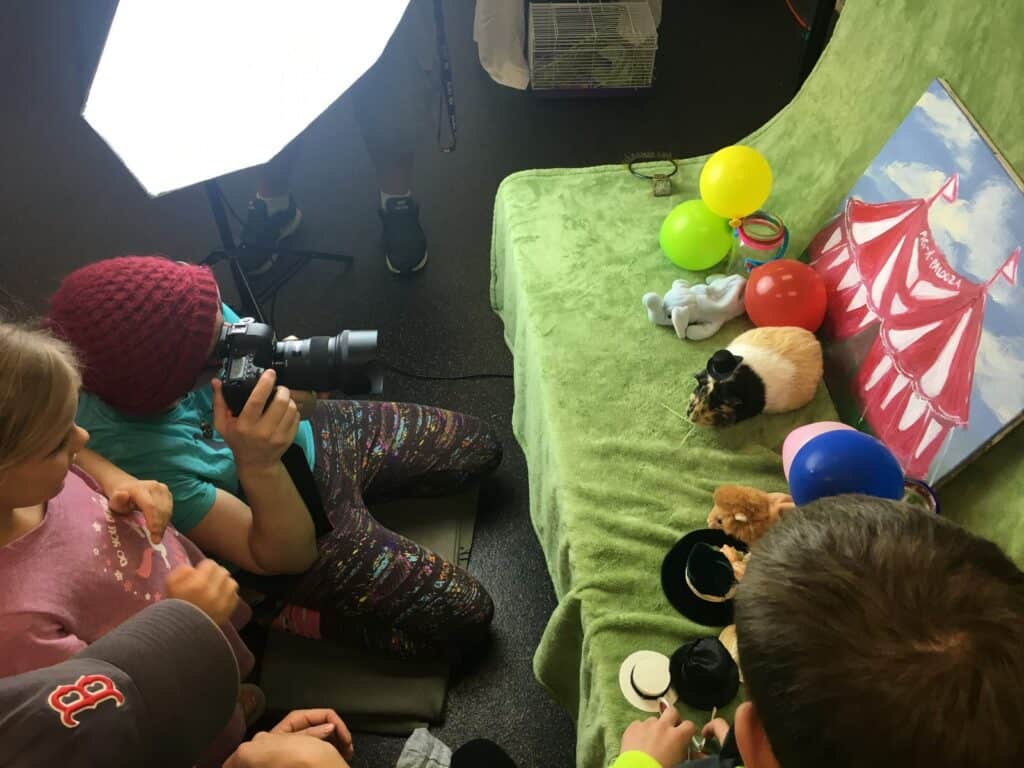 Although guinea pigs are short, when you’re photographing them, you need to be shorter. The best way to capture their adorable snouts is to shoot from a lower angle. To accomplish this, I position the guinea pig on the table, usually nestled on a pile of fleece blankets or on a pillow concealed beneath the backdrop, and then kneel in front of them. Then, I have my handler dangle treats above their nose to get them to lift their chin for the winning shot.

Guinea pigs are fast, much faster than you would probably anticipate considering their eggplant shaped bodies and short little legs. Yet, if they’re freaked out and have the chance to bolt, it’s up to you to make sure that they have nowhere to go!

In my table setup, I use a forever backdrop that’s clamped on the bottom of the table legs as well as the top, so that they can’t run straight through the back of it. Secondly, I put objects, usually whatever is in close range, to create walls or barriers on either side. That way, the only way they can go is straight at me, at which point my handler or myself can scoop them up, give them a treat and a cuddle, and put them back in the middle of the table. 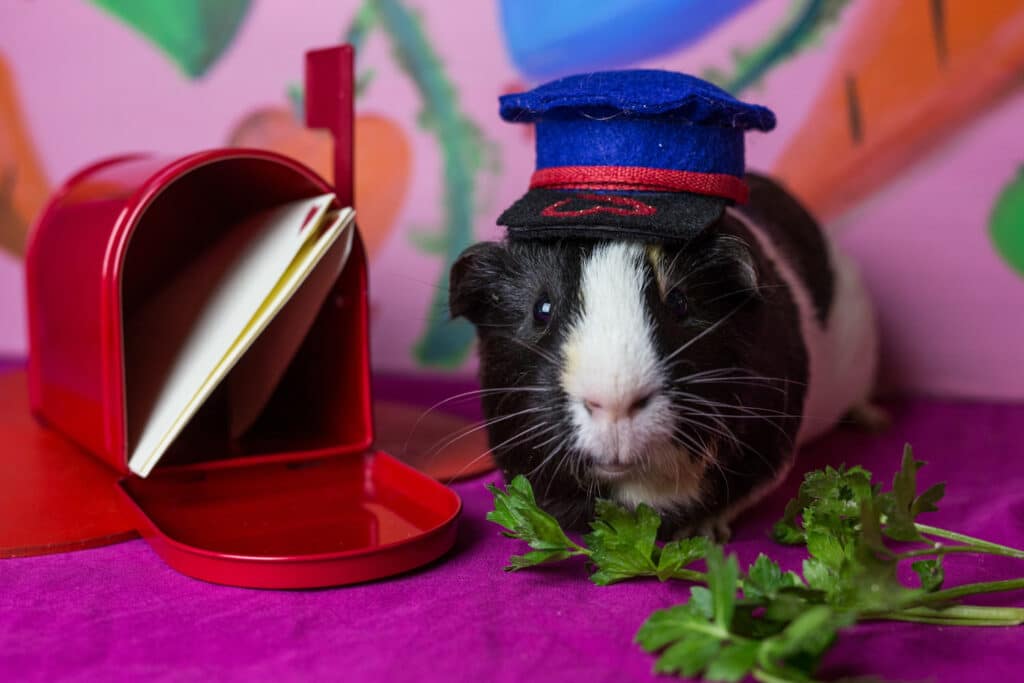 Guinea Pigs like to move around a lot, to hide under whatever is available, and have little to no attention span. Although some guinea pigs will be fine sitting and posing for 10 minutes, more often the window of opportunity is less than 15 seconds.

Therefore, before the pig is ever on the table, make sure your camera settings are good to go. If you’re fiddling with technology you will most likely miss your chance. Put the treats on the table first, then position the pig directly in front of the treat. If you’re lucky, you’ll have until they’ve finished the treat, and if you’re extra lucky, you may have time to place a small hat on their head. 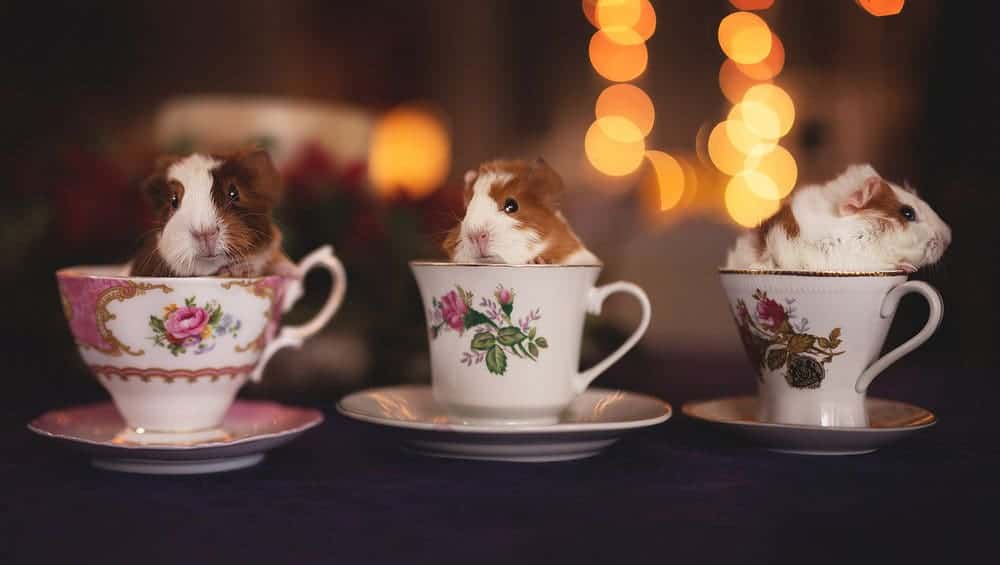 6. PAY ATTENTION TO THEIR BODY LANGUAGE

Last but probably most important, pay attention to the guinea pig’s body language. If a guinea pig is feeling scared, first it will freeze. Freezing is normal and makes your life easier when it comes to photographing them. Unfortunately, the freezing often doesn’t last very long, and can quickly turn to sudden darting for ‘safety’.

The precursor to bolting is that the pig will raise its haunches and back up quickly away from you. Its little eyes will scan the environment looking for an escape route. Therefore, as soon as it starts to back up, the handler should reach in and remove the pig from the environment or attempt to soothe it with petting and treats.

The other side of this is aggression, which happens more often when you are attempting to photograph more than one guinea pig at a time. If a guinea pig is feeling threatened, it could become dangerous for the handler, you the photographer, and the other guinea pigs in the immediate vicinity. Signs of this are rapid side to side rump swivels, raised fur on the back of the guinea pig’s neck, teeth chattering, and an aggravated noise which sounds like purring, but means the opposite, called rumblestrutting. 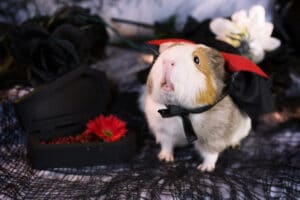 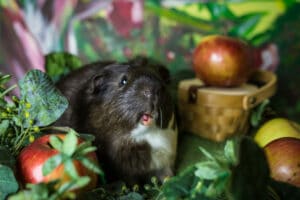 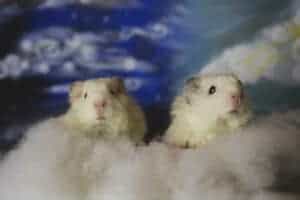 Photographing guinea pigs is one of the most rewarding experiences because there’s no adoptable pet quite like them. The more photographers willing to take the time to photograph these small and furry darlings, the higher chance that shelters around the world will be able to find them their forever homes!

Joey Phoenix is a lover of all things small and furry and the owner of Frog Bailey. As a pet photographer, she has worked with organizations like the MSPCA at Nevins Farm, the Salem Animal Rescue League, and the House Rabbit Network where she uses her skills with photography, set design, and videography to help shelter animals (especially small and fluffies!) find homes!